The Rise and Fall of Google Plus

Auf Wiedersehen, Adieu and Sayonara Google+. On October 8, 2018, Google announced that it will gradually fade out and ultimately dismantle its consumer-facing social network after a data leak put the nail in the coffin of a product already plagued by low engagement, and lack of user and developer adoption. First reported by The Wall Street Journal, a software error potentially exposed the data of hundreds of thousands of Google+ users. Google announced they will help users download and transfer any of their content or information in advance of the final shut down, scheduled for August 2019.

Believe it or not, Google Plus’ future wasn’t always so grim. Google constantly debuted rival platforms to disrupt Facebook’s stronghold on the social networking space. From Orkut (launched days before Facebook in 2004) and Reader (an RSS feed launched in 2005), to Buzz (which failed pretty spectacularly after a privacy issue in 2010), none were successful. Google Plus (often stylised as Google+) was touted as a serious threat to Facebook’s mighty empire. So where did it all go wrong? Three different Google executives have overseen the service, which has gone through significant changes and a redesign in November 2015, which could explain why the platform never took off. Read on as we’ve put together a timeline of the history of Google+, products that worked and some that didn’t.

Although four attempts had already been made to launch a competitive social network, on June 28, 2011 Google unveiled Google Plus proclaiming, “We believe online sharing is broken”; and that they would be the ones to fix it. However, there was no clear differentiation between Google+ and Facebook — why would users want to make the switch?

Although the the new social networking platform from Google included several new features (like Circles for grouping contacts to control what you share with whom; Hangouts, for group video chats; and Photos, that included some decent photo editing tools),  Google+ didn’t feel new – it even looked stylistically like a mashup of Facebook and Twitter. However, after just two weeks, it seemed like all was going according to plan. Just a month after launch, Google+ already had 25 millions users and showed no sign on slowing down. By the end of 2011, the platform had over 90 million users and seemed to be on its way to becoming a real threat to Facebook. 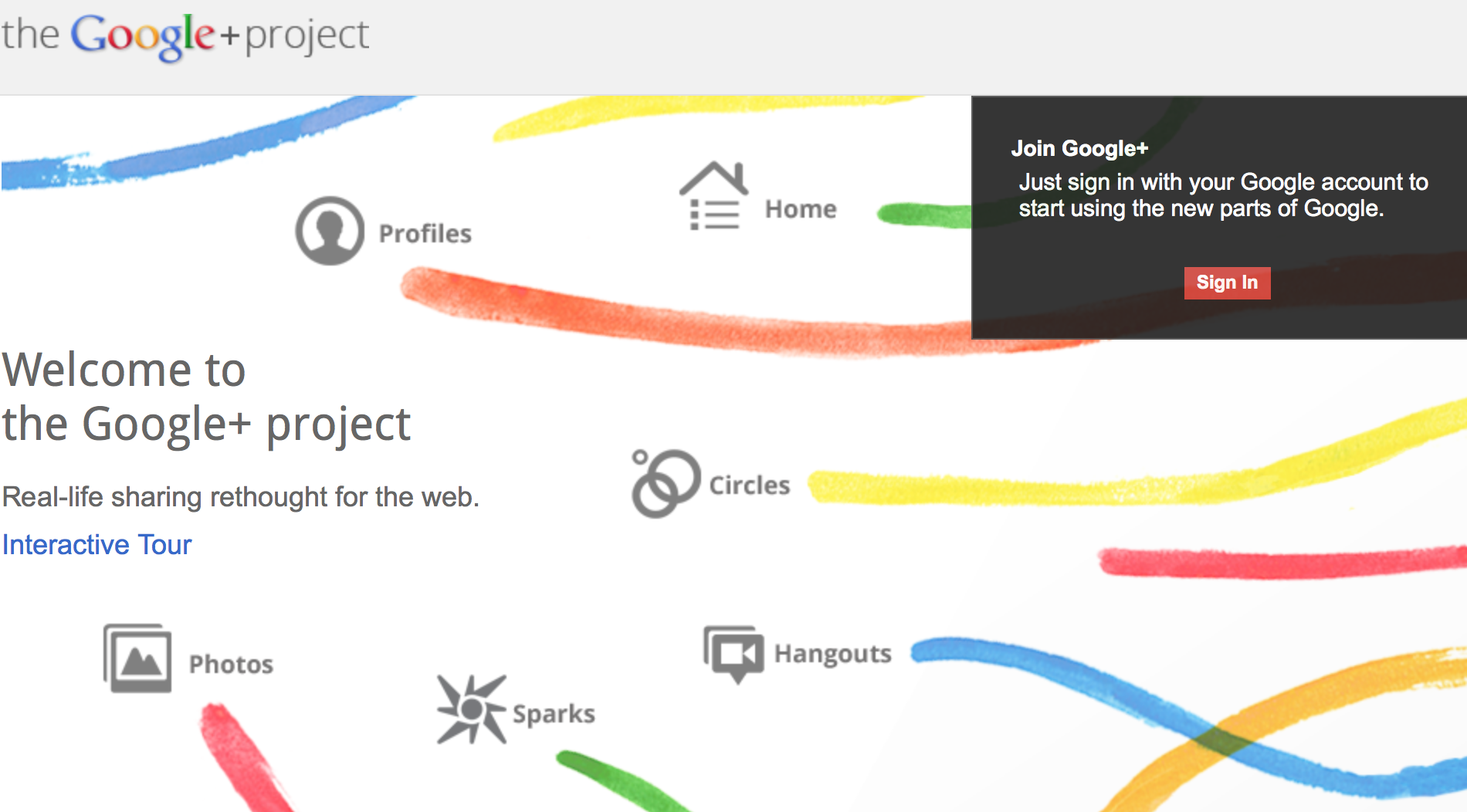 February 2012 – The First Seeds of Doubt

With Google CEO Larry Page reporting 90 million users, it would seem that Google Plus was on its way to becoming another social household name. However, The Wall Street Journal labelled it as a “ghost town”compared to Facebook. Others reported that people were signing up but only because Google forced users to have a Google+ account through Gmail and YouTube; and that very few of its users actually engaged with the platform.

After 2 years of dramatic user decline and rejection from users, Vic Gundotra (the Google executive who spearheaded the campaign for Google to develop a social platform) announced he was leaving the company. Vic was one of the founders and major supporters of Google+. This departure signalled the first of Google’s moves away from Google+.

The next Google VP to take charge, Bradley Horowitz, began to segment Google+ into different services. Previously, Google+ had been integrated with YouTube, Gmail, and Hangouts by forcing users to link their Google+ account with their other Google owned services.  Under Horowitz, they broke free. For example, YouTube users could now comment on videos without needing to have a Google+ account, which made many of both platform’s users happy…but not happy enough to go back to Google+.

In November of 2015 Google+ saw its biggest overhaul yet. Horowitz and Google Product Director Luke Wroblewski teamed up to redesign Google+ around what they believed was working with users: Communities and Collections. Centring the new Google+ around users’ interests gave them the freedom to network around topics that interested them – without necessarily involving their personal connections. Along with a colourful new front end and “About Me” pages to stimulate engagement in users, Google hoped this repositioning of the platform would move the needle in the right direction.

Google+ continues to focus on its Communities and strips even more of its features. Google Play games was removed from Google+, and users also said goodbye to Event pages and Hangouts on Air (a live broadcasting conference call service). Google+ even shifted from a chronological timeline to algorithm model like Facebook. This switch, when combined with the decision to remove hashtags, made discussion about current events nearly impossible. Google+’s timeline also heavily favoured Collection posts over regular content. By the end of 2016, Google+ had lost nearly all of its defining features such as: Auto-awesome, Google Plus Photos, Google Plus Hangouts on Air and Hashtags — not to mention a good portion of its staff. 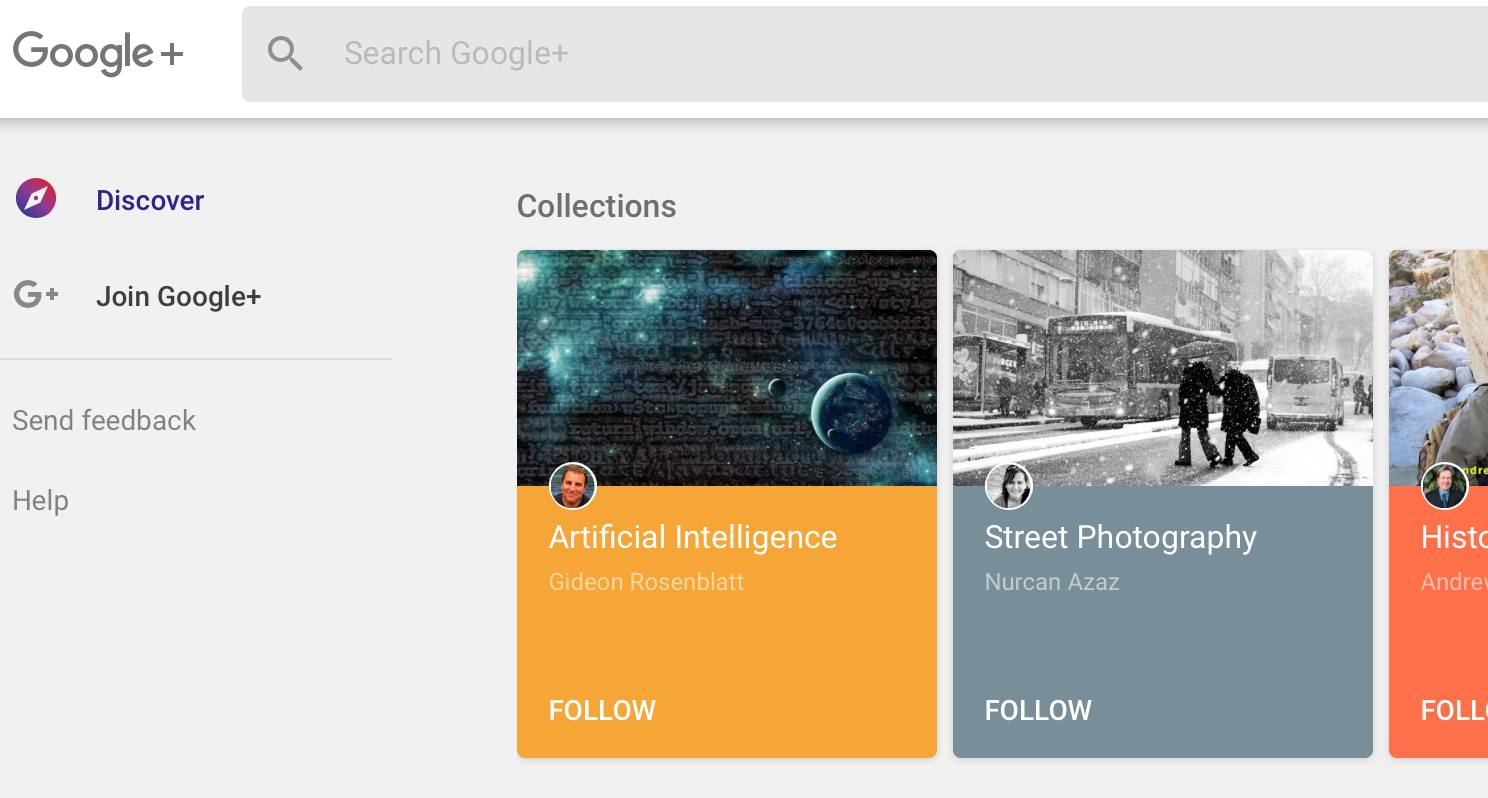 User engagement on the network all but bottomed out, although a few last ditch attempts to revive the network were pushed through. A redesigned Android app was launched in early 2018, but without much fanfare, as it provided no new features or functionalities for users. Another huge issue were sex bots, spamming user timelines with with links to webcam shows, although Google did release a Delete, Block and Report feature. A data breach, caused by a 2018 bug fix in Google+’s API ultimately forced Google to come to terms with its failed social media platform.

In a post written by Ben Smith (Google VP of Engineering) on Google’s blog, users received an explanation about how Google came to the decision. Smith cites that while a lot of time and effort had gone into making Google+ a success, adoption and low engagement figures clearly showed it was not performing well. In fact, 90% of Google+ user sessions are less than five seconds. Google+ users that are still active will be given a 10-month wind-down period in which Google will provide them with ways to download and migrate any data they wish to keep; before ultimately shutting down the platform in August of 2019.